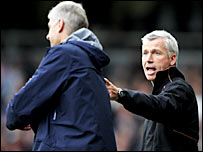 In an astonishing lack of class even for a football manager, Arsene Wenger really took la biscuite et aussi la mange. West Ham score an 89th minute goal, it's 1-0 and they're on the verge of beating Arsenal. Pards celebrates like a man who's just correctly answered a football trivia question that's stumped him for a good few hours (these scenes are periodically seen in the Sports and Social) and then it's bingo bango as Arsene Wenger, the supposed cool as a cucumber philospher cum football manager, takes exception and goes after Pards, and to compound it he refuses to shake hands after the final whistle. Even ex-Gooners Dixon and Wright cannot defend him on Match of the Day 2. Pardew goes so far as to apologise in the post-match interview saying that his celebration was over-zealous - surely it would have been easier to stick two fingers up and call Wenger a bad sport? It also emerges that Pardew invited Wenger to his office for a conciliatory post-match glass of wine which Wenger, showing his class, refused. Wenger also refused to give any post-match interview.
1-0 to West Ham and 1-0 to class over Arse.
A total lack of grace was also seen in another part of London as Jose Mourinho spat out his dummy, crying like a bitch about a disallowed goal and a red card. Ok so Jose has more reason for complaint than Wenger but football is football and decisions are taken and, inevitably, mistakes are made. Of what I saw Spurs looked good and came back from an absolute hammering early-on in the game. Yet with the blinkers on Mourinho cannot accept this. Why look critically inwardly when you can spout bile in other directions?
Fergie, the Grand Old Man of the Premiership, must have been having quite the day: celebrating his 20 years in charge of Manchester United with a commanding win over Portsmouth on Saturday, he then watches Arsenal and Chelsea lose and then cry on the Sunday.
So given that I do not support a Premiership team, I would like West Ham to win it. As they obviously won't, I gotta plump for Manchester United. Listening to Mourinho and Wenger makes it an easy decision to make.