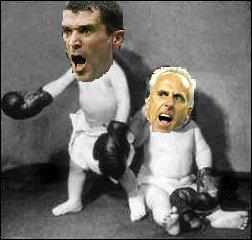 In the Amber corner, Mick McCarthy and in the Red and Black corner, Roy Keane. Their first encounter was choice with some fine insults and ill-feeling floating around with Keane's "You can stick it up your bollocks" sealing a points victory. Actually, as Keano's diatribe led him to miss the World Cup it might have been a split decision. This evening's contest promises to be more sedate and, dare I say, civil. Apparently the two have made up their differences, but I reckon it's still going to be pretty volatile.

Comments:
Yes, I think its gonna be an exciting one tonight. Come on Roy Keane, lets show Mick McCarthy what Sunderland's really made of!

Hopefully I'll not have to eat my words after the match.

I'll eat half my words, we didn't deserve a draw but luck was on our side for a change! I think Keano should've put bets on himself punching Mick. He could've bought us some new players with his winnings!!