England playing well? I don't know, it's all dutch to me 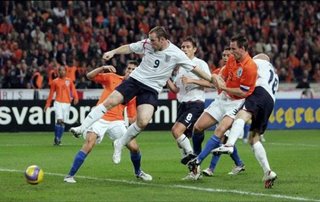 I watched all of this match and must say that although the result was good enough, how gash were both teams and, in particular, the Dutch? Absolutely bloody hopeless. Not impressed by England at all. Getting quite fed up with our team at the moment. Interesting rumour that King, Bent, Lennon and Jenas all pulled out in protest to the Terry vs. Tottenham bust-up which is rumoured to have had a bit of racial spice to it.
Micah Richards played well as did Ashley Cole but Terry and Ferdinand just don't inspire confidence and it is surely them, above Robinson, who was to blame for the shoddy Dutch equaliser. And wasn't it great to see andy Johnson play on the right?? Unbelievable. Why can't we play 2 strikers in a 4-4-2 formation. Oh and Michael Carrick? Just not coming up to international class. We are missing Hargeaves.

With Lampard on the bench with players like Walcott, Johnson, Carragher, Rio and Carson