Equality and blood-sucking in equal parts. Welcome to this Open Primary 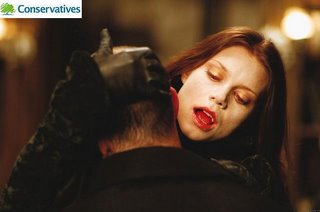 The Tory Party is alive and kicking. Believe. Not only are they back stronger than ever, thinking what we're thinking but they are now all inclusive too. Eco-warrior? Staunch Patriot? Ethnic Minority? Come on down, the price is right. Taxes? F*ck 'em! Unions? F*ck 'em too! Yee-ha cowboys, there's a new Blue in town.
And where would this new Conservatism find its spiritual sanctum? Well, no other place than Harrow East where the Tories have just selected their next candidate and I can barely believe it, they've selected a black man! This is what the Cameron A-List is all about. Alas he is a black man in name only, for the chosen one is Bob Blackman. Amongst the defeated candidates was Mimi Harker, a vampire creation of Bram Stoker. So ethnic minority? Tick box. Vampire? Tick box.