The Good, the Bad and the Ugly - the Ashes selection dilemma in a nutshell 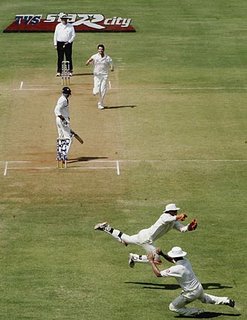 Another disappointing day at the office for the English cricket team (not as disappointing as the office down the corridor where a certain Mr Andy Robinson is rumoured to be clearing his desk). Duncan Fletcher has announced that Chris Read has been dropped in favour of Geraint Jones. It is not so much a question as to why Fletcher loves Jones so much, but rather what has he got against Read? Jones' keeping has, to be fair, improved considerably over the last couple of years and, at the top of his game, is a better batsman. Yet upon being dropped from the test team it was said that Jones needed to go back to county cricket and rediscover his form. He didn't. Read came into the team and played well.
However, it is not all doom and gloom as it looks like Saj Mahmood's almost comical inconsistency has been noticed and he is set to be dropped in favour of James Anderson. Anderson is a class bowler and I think he'll do well.
But if Anderson is included it would also indicate that England may go with Giles ahead of Monty due to the harebrained obsession of playing bowlers with better batting averages. Just imagine dropping someone like Glenn McGrath for someone like Derek Pringle because Pringle had a better batting average. Obviously, the gulf between Monty and Giles isn't as vast as my example but the point remains the same. The problem position is number 8. Mahmood cannot be played for his ability with the bat alone. The same applies to Liam Plunkett and given that Harmison is bowling utter crap at the moment and Hoggard will find it hard in Oz, I wouldn't mind going in with two spinners. Perhaps this should mean that I should include Collingwood in the team, probably at the expense of Cook but I think Cook and Bell should shade it and Freddie may have to give more overs to part-time bowlers like Trescothick, Bell and KP. It's a tough, tricky call but, for fuck's sake, why else are Fletcher, Graveney and Miller selectors?

Barry Beef's preferred England starting XI for the first test of the 2006-7 Ashes series, Brisbane November 23rd is as follows:

Axe Trescothick for Christ sake and open with Cook and Strauss and use Collingwood as the occasional bowler... although any 'occasional' bowler, even against the Aussie tail, is one bloody big risk. But Trescothick is shot, anyway, (that could come back and bite me on the arse) and will give way in any even. Michael Vaughan, My Lord, is on the way back.