I micah guessed he'd be in the squad 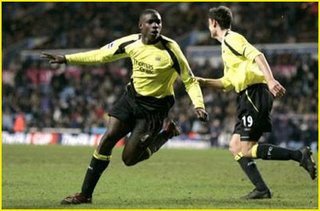 It doesn't happen often but I was right. Micah Richards in the England squad. Booya. I told you here and here, I'm not saying I was first but no-one said it before me.
One thing that springs to mind though is what happened to the overhaul of the squad? I'm sure in the autopsy of England's dire performance against Macedonia and Croatia, Macca said he was going to take a long hard look at the Under 21 squad and, I assumed, with the intention of putting them in the squad?
Wes Brown instead of Johnathan Woodgate? I don't buy it. Jermaine Jenas but no Walcott? I don't know...Come on England.

Comments:
I called Walcott as being England worthy back in september last year, when he with southampton.talented guy, looks like he's 12. lol. I have no idea why he isn't in the squad.