If you wanna be a record breaker 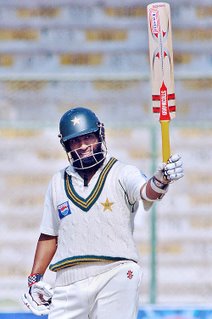 Mohammed Yousuf today broke Viv Richards' 30 year record of the most test runs scored in a calender year. He was finally out today for 124 and a grand total of 1788 (Richards total was 1710) consisting of 9 centuries (also a record). England were one of the countries to have suffered at Yousuf's hands with India and the West Indies also taking a pasting.
It is strange that given this amazing record, he is generally not recognised in the top elite of world batsman. In this group are Lara, Tendulkar, Dravid, Kallis, Ponting and Inzi (Yousuf's corpulent Pakistan team-mate), whereas Mohammed Yousuf has not really achieved the recognition he deserves. Personally, I would now include Yousuf and Justin Langer (with KP to join after leading England to a fantastic comeback Ashes victory) in the top, top grouping.