Is it right or wrong to speak ill of the dead? 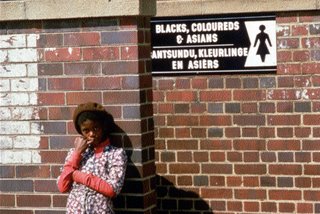 If I hadn't woken up feeling like death warmed up (actually how do you refer to this sensation when you are actually freezing too?) I would have been much cheered by the news that PW Botha, ex-President of South Africa and staunch defender of apartheid had passed away.
But as the title suggests I find myself facing a moral conundrum: I mean the guy's dead and you shouldn't speak ill of the dead. I was surprised that the ANC had sent a message of condolence to Botha's widow and then there's Nelson Mandela saying Botha wasn't such a bad chap.
But how can you be magnaminous about the guy who headed a white power Government for over 10 years and sanctioned the killing and torture of anti-apartheid activists. Hmmmm, I think I am answering my own question here - it's not speaking ill it is pointing out evil that he perpetuated.
Let's hope Mugabe follows suit soon.

Comments:
I went to a party last night where I drank a good few glasses of a Cocktail called "Peachy Keen"... it's a South African influenced tipple.

I drank them and announced to the club that I was celebrating the passing of PW Botha. A few people, not to my surprise, looked compltely non plussed, and a few city-type lawyers cheered, which was definaetly to my surprise.

And yep, I am currently in the process of creating a very english cocktail which I will call "The Twin Set" and I intend to get sloshed on that when a certain person kicks the proverbial bucket.

Sorry if it seems mean, but got I felt fantastic last night.

phew! glad i am not alone. to be in a set with you, my little Pookistani is to be the coolest of the cool.
looking forward to the twin set. i hope it matures very, very quickly.

Well done pookie, please post the ingredients of the twin set when you have as you are not alone in anticipating that one.

A drunken discussion yesterday lunchtime in a London boozer, between myself (Londoner), a Kiwi and a Welshman was along similar lines. Botha was a stunted bigot, and a disgrace to the liberal decent majority of all colours in SA.