More on those Pigs 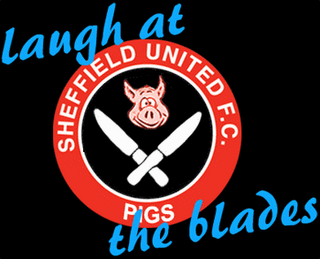 I used this picture last month here and, luck be a lady, those Piggy b*stards have made it necessary to post it again. Not satisfied with trying to knife each other, or putting people in hospital it is now the turn of fat, bald keeper Paddy Kenny to get in on the act.
Kenny bottled on of his friends after it emerged that this mate had been knocking off his Mrs, as had another mate. With friends like that, mate. After being bottled, his mate bit Kenny's eyebrow off. So you got one eyebrow and your Mrs is shagging your mates. It gets worse and worse.
Pig manager, Colin Wanker denied there was a discipline problem at the club just saying that his players are 'thick'. Yes, Colin thick and criminal thugs. An absolute disgrace to the Premiership. Come On Man United, I hope you trash the Pigs tomorrow.