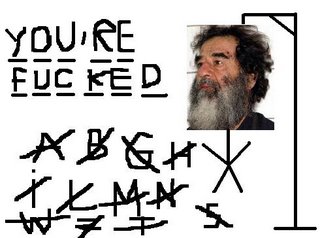 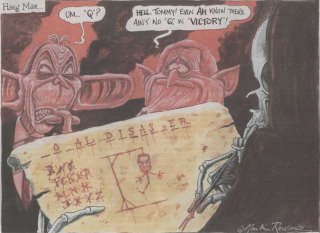 Should he be doing the Tyburn Jig? Should he be given an ASBO and Community Service? Should he be put into prison and left to rot?
Please leave your opinion in the comments either Guardian or Paintbrush to state your preference.

Update: As a side point, when did Saddam pick up his extra surname? Al-Majid? It was always strange to hear Clinton or Bush or Blair refer to how evil Saddam was. I mean, he never referred to them as Bill, George and Tony. Anyway if he gets off without hanging they should rename him Saddam Hussein Al-Magic Johnson. Just a thought...

Comments:
It's gotta be Paintbrush.

And how about a re-release of "Disco Inferno" with some amendments: "Burn, Ba'athist, Burn ..."

Or, how about "I'm A Celebrity"? Or Big Brother (not the celebrity one, doesn't go on long enough)? Is there a Kurdish edition?

There's a good article on Saddam and his trial at this link here:

It's not very long but it's full of information and very interesting.

Incidentally, the reason Saddam was referred to by his first name was that is the custom for a lot of Arab leaders. His full name, with correct spelling is Saddam Hussayn Al-Majid. He later took on the suffix al-Tikriti to curry favour with his home town of Tikrit.

Jail and let him rot. Hanging him lowers the court towarsds his level. Sadly, we can't really be seen to be interfering in a justice system we helped set up just because we don't like the outcome, which is the problem Ministers here, from the PM down, have been struggling with when journos keep asking their opinion.

Thank you Suna. I may well like to be referred to Barry Beef al-Blogosphere although it would be tenuous as I am not an Arab leader.
Thank you also for the link, it's a very good post and, of course, Western complicity in the Saddam regime should not be forgotten.
I really am split on this subject. I just don't know. In regular cases I am totally against the death penalty but this is not a regular case. The man's, in essence, a mass murderer and guilty of genocide.
As far as I can see he deserves the death penalty, now it comes down to whether the death penalty is morally acceptable...

Who's next for the jig?