Too good to wait for 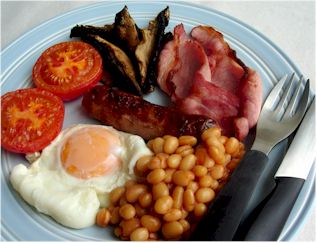 Hmmmm...to what could the title allude? Rocky Balboa? Pauline Fowler's impending death? Both excellent calls but both, in this instance, wrong. Not only wrong, but nowhere near. Of course, the answer is the Terrace Cafeteria breakfast and the guilty party being one Diane Abbott MP, who pushed in directly behind me in the queue this morning. Sadly, no-one thought of saying something to the oh-so-socialist one. Unlike Diane Abbott herself, pushing in is not big and is not clever.

Comments:
Didn't I see Galloway pushing in front of you when you were there last Friday. Must be something about you Barry which makes leftie MPs push in front.

1) Abbott did not push in front of me, but rather behind me and in front of poor pityful commoners, counting amongst their number one Manchester United supporting House of Lord's attendant.

2) The bearded one also did not push in front of me. As you will recall I was stuck waiting for sausages to be fried so the Gorgeous One just got served before me. As objectionable as he is, he was not to blame on this occassion.

Glad that one is cleared up. I should be around for pints this evening, but nothing too heavy. Still not quite fully fixed

just be lucky she isn't your mp. hoo-miliating.