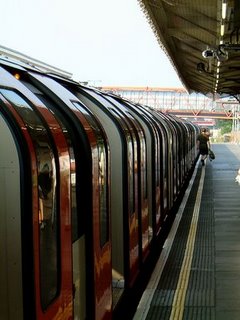 Using the Central Line every work day I am hardly a stranger to delays. Indeed, for the last 3 days I have been in no danger of getting to work anywhere near on time courtesy of the Underground's unique network of signal failures, power failures, defective trains and passenger alerts.
Today was a particular treat with Gants Hill tube advising the next westward service would be in 7 minutes, this remained in place for another 5 minutes and was then raised, somewhat oddly, to 12 minutes and soon thereafter reduced back down to 9 minutes. Eventually the train came in and the conditions were, well cramped would be understating travelling conditions at which even a sardine would balk. Basically, if you were not already a contortionist you were about to get a crash course.
A truly horrible and soul destroying way to start the day, which was by no means improved by the driver announcing, at every bloody pause in the service, that the Central Line was running a special timetable. Well, if Ken or anyone at TfL is reading this your special timetable is rubbish.

Comments:
Not just the Central Line! The Northern Line was being advertised as running a "good service" this monring. This apparently means 10 minutes gaps between trains at rush hour with consequent overcrowding. And why, when everyone is squashed in like sardines, do you always get some joker asking people to move down and claiming they can see some mystical space and thus implying that we all being squashed against each other for fun? Oh, and though the Victoria line was advertised as "part suspended" it helpfully didn't tell you which part! But will TfL contemplate any sort of refund on your travelcard? You must be joking!

I wish I could travel on the tube! I live in Birmingham and it takes me 45 minutes to travel a 3 mile journey because there is no transport infrastructure - not even bus lanes! grrrr

like the majority of things/people in Birmingham you remain anonymous. Sound thinking. bout time they sort out the WM Metro system.

the underground regularly says there are no reported dealys but suddenly when ur on the platform they announce that actually there are. it is a form of Stalinism, all brutal lies without recognising the obvious.

Not that I'm ashamed of living in Brum (not born and bred actually) - just can't think of a funny enough name!
Maybe it's just because the TfL workers are so unfulfilled in their jobs so it's the only way of amusing themselves...
The overcrowdedness is terrible though - the Guardian once offered commuters a lift in a cattle truck instead and everyone said it was better!

Why don't you get a bus. You can get a seat most of the time...and if your feeling in a particularly jovial mood, you could always shove an OAP out of the way and grab yourself a seat for your bovine buttocks to rest on.