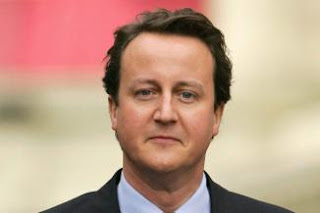 Despite never having voted Tory and having no intention of ever breaking this habit, I felt a bit for David Cameron. Even when he's not hanging out with Basher, Squeaker or 14 Pints-a-day he has to do pesky media appearances and last night I listened to Cameron being interviewed on the James Whale show and, well...it probably wasn't as good as he had hoped.
First off TalkSport was advertising the interview as a live interview whereas in reality it was pre-recorded. This instantly made DC look like a gutless tit. Whale, of course, asks no political questions but bases everything in his own ridiculous prejudices. His wildly unbelievable stance on equality and asking Cameron about his smooth complexion probably did not give Cameron the best platform to convert the country. And consequently, Cameron came across like the political vacuum he is.
After the interview Whale, like the gutless, belligerent, bullying bigot he is turned on Cameron, slating him for not doing the interview live and for having his Press Secretary on hand to make sure the interview didn't go on too long.
You can't blame Cameron, you got to think that Whale is pretty low on the totem pole of importance. He is to political philosophy what plancton is to the food chain. I mean he asked Cameron about the NHS and Trident in almost one breath.
Oh well Dave, once bitten twice shy. How's about Jon Gaunt next time?