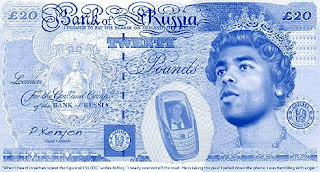 Irregardless of Cashley Cole being a fantastic player and a key element of the England national team, I think most neutrals would agree that his transfer from Arsenal to Chelsea reeked of scuminess and greed. Well this weekend, for the first time since leaving Arsenal, Cashley will be part of the Chelsea team going to the Emirate Stadium. Hopefully, the Arsenal fans will lose their Highbury Library reputation and give Cole a grilling. This is certainly the view of the delightfully, insane Arsenal goalkeeper, Jens Lehmann who is quoted as saying: "Of course. He should get it...That's football and it makes it exciting. If not, it would have meant he wasn't an important player for them [the fans]. But he was, he was a vital member of our squad and we had big success with him so of course he has to expect some negative emotions towards him."

* Thanks to Mr Treasury Tag for posting me two treasury tags in the internal post and for emailing me the Cashley note.