A good omen for England as Damien signs off 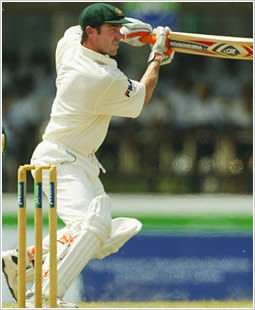 So far the England cricket team's tour of Australia has not been too much fun. Inbetween getting schmeissed around by Langer, Ponting and Clarke and getting our bails dislodged by Warne, Clark, McGrath and Lee, we have had the dubious joy of contemplating why on God's (or whoever's) green earth Messrs Jones and Giles are in the team.
Well things have progressed slightly with a very odd ECB XI amalgamation consisting of Ashes squad players not to have yet played; three retired internationals (Alec Stewart, Adam Hollioake and Robin Smith) and academy players were beaten comprehensibly by a Cricket Australia XI. Really you would have thought that some of our test players could have done with an extra run out. But then hey, what do I know? I am not managing or picking an England team that is 2 down in the Ashes with 3 to play. Anyway, Monty picked up 2 wickets and Stewart top-scored. Yes, a man who is 43 and retired for, I think, 3 years top-scored.
But don't be put off, heaven forbid, for it is not all doom and gloom. Monty's in the wickets, Freddie has come through a fitness test and Damien Martyn has retired with immediate effect.
Martyn, with Langer and Warne, is my favourite Aussie player and I am over the moon to see him retire. although, he hasn't excelled in this Ashes series and had a dodgy time last time round, Martyn is sheer class. An elegant player with oodles of experience, Martyn had the ability of playing world class bowling like it was a stroll on the beach. Easy Like Sunday Morning could well have been written by Lionel Ritchie after watching a masterful Martyn knock. Suffice to say, I am really happy he's gone. At least, it gives England a bit more of a chance. The situation evokes memories of Nasser Hussain retiring with the prospect of being dropped - for Andrew Strauss - a very real possibility. Martyn was facing pressure from Shane Watson, Andrew Symonds, Michael Clarke and Adam Voges