Got a fence? They'll sit on it 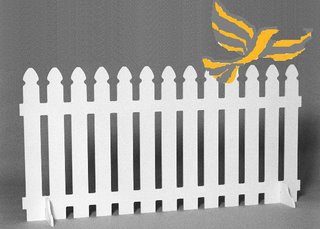 To whom could this title refer? Well surprise, surprise it's the Liberal Democrats opining on the future of Britain's nuclear deterrent. Gordon Brown is in favour of renewing Trident at an improbable and immorally high price, as is Dave. John McDonnell is against the renewal, a view to which I readily subscribe. So what do the old Lib Dembs do? Get comfy and hop on the fence for a 50% reduction. Basically, Britain should have a deterrent, but not as much as a deterrent as now. Oh ok. Well that's a good policy. I don't think I have heard such an impractical suggestion since Graham Taylor thought Paul Stewart was international class.
I am against Trident but I can, at least, recognise - if not agree with - the argument for renewal. What I cannot understand is whether this Lib Dem stance is a serious notion or merely the half-baked, wimpy, non-commital, begging for the very, very soft left disgruntled Labour vote soundbite that it appears.
Just a crazy and wooly idea.

Lib Dems have always had a penchant for sitting on the fence and enjoying the sensation (but it's more enjoyable all round if you sh*it on their faces while they are there.)