I wouldn't bet on it 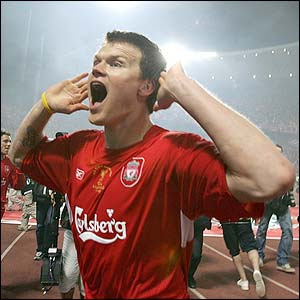 I was on my way back from the Sports on Friday night and was just settling in to E.H Carr's, The Twenty Year Crisis 1919-1939 when some loud, obnoxious and I would assume hammered gent declared, annoyingly loudly, that John Arne Riise was German. Ok, so this is no big deal. It could have been dafter, for instance he could have claimed Chris Waddle was Japanese, or William Gallas is Martian.
Riise, the Liverpool left-back, is Norwegian and has won 56 caps but Mr Annoying kept on going about Riise being German. And, to this end, he even had the drunken idea to put a £10 bet with his mate on it. I'm not a betting Bull myself, but I would have upped it to a lot more than £10.
All of Mr Annoying's friends said Riise was Norwegian and begrudgingly Mr Annoying made with the dollar. What a fool. Or 'cock' as a lady getting off the tube succinctly put it.