Long post alert, but worth reading. A defence of Zara Phillips (sort of) BBC Sports Personality of the Year winner 2006 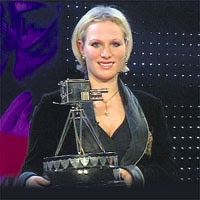 Comments:
Put me in an F1 car and I could work miracles.

20 defences of his WORLD TITLE no less

Very interesting and good piece, however, I have the horrible image of big Andy Fordham gently cantering round the stables on an elegant horse. Ugh.

but with all the calzaghe furore it is easy to forget how singularly unimpressive he was against sakio 'the scorpion' bika.

2darts - put a couple of pints down your neck and you occasionally work miracles at the oche, although i haven't seen you use all 3 darts. that would be miraculous

Excellent post Barry - will be printing it out and handing to anyone who slags Zara off - much more eloquant than me!