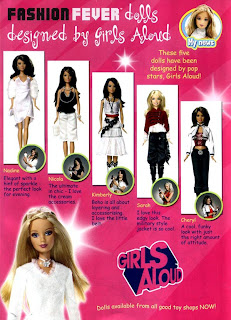 I don't know much about politics, so when I am unsure about an issue I like to check what the celebs are thinking. So imagine my pleasure upon seeing those giants of the realm of modern political philosophy, Girls Aloud talking about the problem of politicians being cool, or should that be uncool?
'Dave', the very epitath of cool has said that out of all the Girls Aloud girls he fancied Cheryl Cole the most, but Mrs Cashley was none too impressed saying that 'Dave' should stop trying to be so cool and that politicians should concentrate on running the country. What a good concept. Just imagine:

Jeremy Paxman: So 'Dave' your policies are half-baked, what are you going to do?
'Dave': I'll tell you what Jeremy, I don't know about you; but I do like that Cheryl Cole. What about you?
Jeremy: Always been more of a Sarah Harding fan myself, she's fit.
'Dave': Yeh!
Jeremy: Yeh! Anyway, 'Dave' are you going to cut taxes and maintain public services expenditure?
'Dave': Who cares? I like Nicola.

But my favourite part of the story, well let me just cut and paste from the Beeb:

"One of the band thought they had met Chancellor Gordon Brown - but the others assured her it was actually Home Secretary John Reid who had been pictured with them at an awards ceremony."

Yeh, they do look kinda similar. That is my second favourite quote of the week after the Lord Lucan's comparison of 18 Doughty Street to one of his farts.