One great idea that never quite made it...yet 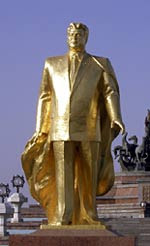 It must now be a good couple of years ago that two bloggers: one prominent (not me) and the other not prominent (me) came across an ingenius idea. The War on Terror (tm) was just hotting up and I commented what sweet irony it was that the word fundamentalist contained the word mentalist in it (this, of course, referring to inert strangeness and eccentricities rather than mental health deficiencies). My more established and esteemed Comrade concentred on the Funda part of it, and thus was born Fundamentalist - a website dedicated to voting for your favourite mentalist with proceeds going to charity. However, chronic laziness led to the idea flopping like someone off the top board at one of Michael Barrymore's pool parties.
But one guy I did write up was Saparmurat Atayevich Niyazov, President of Turkmenistan and the kind of guy who if he was English would be seen wandering around pedestrianised shopping centres warning of the apocalypse, or standing on Oxford Street with a loud-hailer declaring: "Don't be a sinner, be a winner", yet when transported to a Central Asian nation becomes ideal leadership material. Anyway, here's what was drafted but never published and can now serve as a kind of obituary.

One part authoritarian dictator and one part eccentric, Niyazov is seen as a deity in Turkmenistan giving the cult of personality a real shot in the arm. He is referred to as Turkmenbashi meaning "Great Leader of the Turkmens", so he can also count modesty as one of his traits.
He was appointed by Gorbachev in 1985 and adhering to the adage of one good turn deserves another he was a prominent supporter of the coup against Gorby in 1991. Niyazov survived the post-Communist upheavals in the former Soviet bloc and became the first President of Turkmenistan. He enjoyed the role so much so that as a Christmas present to himself he declared himself President for Life on 29th December 1999.
So far he sounds like your regular despot, the kind you'll find throughout this site, however, it is his eccentricities and, quite frankly, oddness that puts him firmly in the Premier League of mentalists. Niyazov has renamed towns, schools, airports and even a meteorite after himself and his immediate family. He has banned opera and banned men from listening to car radios. There are statues and portraits galore of him, and also of his mother, throughout the country, the most impressive/scary of which is the gold-plated statue atop Ashgabat's largest building, the Neutrality Arch, that rotates so it will always face into the sun and shine light onto the capital city. His writings and speeches are the staple of the Turkmenistani educational system, but he has desisted from calling for City Academies. All watches and clocks bare a depiction of the President on their face (a trick I think he picked up of Colonel Qaddafi or Walt Disney) and Niyazov has also replaced the alphabet and renamed months and days after national heroes, of whom a spookily high percentage are his own kin; or, naturally, him. However, he is keen to dissuade people away from the fact he is a megalomaniac by saying: "I'm personally against seeing my pictures and statues in the streets - but it's what the people want."

Comments:
Barry - this still may happen... I keep mulling over the details...

Monkey - I hope it does. I would love to write up about Qaddafi trying to (and in some cases succeeding) in boning every Western woman who came to see him.