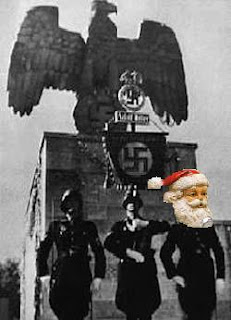 Is Santa Claus a Nazi? Was Blitzen (of Donner und Blitzen fame) named after Blitzkrieg? Was it never actually Nicht schiessen, but rather nicht shoppen, Santa will provide? It sounds like a conspiracy theory and to be fair, it's not even vaguely based on reality; but since when has that put me off blogging something? 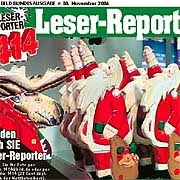 The argument emerged in Germany (was fuer eine Ueberraschung?!?) as Christmas shoppers were shocked to discover row upon row of Santa Clauses looking to all the world as if they are giving the Hitler salute -- right arm, straight as a Mitchell, raised to the heavens.
I would have thought that the big white beard, the bag of toys and the red appareil would have hinted more to Santa than Hitler. Judge for yourself.