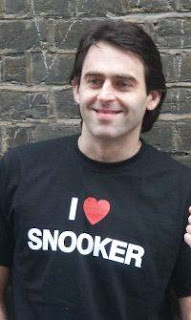 Ronnie O'Sullivan is the best snooker player ever. His brilliance is only matched by his temperament, which is shaky to say the least. It is quite common to hear Ronnie bemoaning this or that in post-match interviews, he is the very essence of a tormented and tortured soul. Quite recently, I have enjoyed his practice of bringing out a mug of hot water (presumably not so piping by the end of the session) to keep his digits...warm.
Yet in today's Quarter Final match of the UK Championship (in which he was pitted against Stephen Hendry), Ronnie was trailing 4-1 but 26-0 up in the sixth frame. Then he missed an easy red and stormed off. Yep, actually gave up, conceded the match and left.
An enigma to be sure.

Comments:
Very sad :/ I've seen Ronnie at his best in the Masters at Wembley a couple of times, and he's a joy to watch. Hopefully he can get himself together again before they start next month.

Too much of the ganja me thinks....

Sort it out Ronnie! He can play. He can win. He is a genius and lets hope he doesn't go the way of the Hurricane....