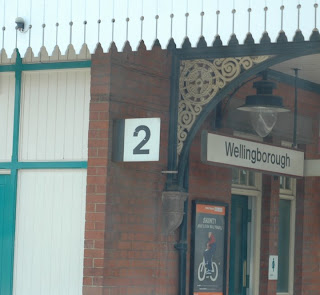 Quite often of a weekend, I will shoot off from work on Friday at 5 on the dot and scurry off to Euston so as to go to Northampton where my girlfriend resides. Being of a romantic inclination, I get quite excited about seeing her and there's only one thing that can temper this excitement. Yes, it's the bloody trains.
There was a massive power failure at, I think, Milton Keynes so there were no trains to Northampton. Being the superstar that she is my girlfriend says to come to Wellingborough and she'll drive across and pick me up.
This mean that I need ot haul my bovine ass off to St. Pancras rather than Euston, but this is no drama. But honestly what a crappy station St. Pancras is. Egad! I know the area of St. Pancras previously used to be full of slums and by the current look of it, I can only assume that St. Pancras is making a conscious effort to return to former glories. Four ticket machines of which four were out of order. Who says you never get 100% on British public transport?
Yet as the train left its pokey starting point, I was happy again as the journey only lasts about 50 minutes. Well, let me say categorically that there is no such sight as deflating as Wellingborough train station on a rainy evening. What a hole!
Still wonderful weekend nevertheless.

Comments:
I went to Beccles once and waiting 20 minutes for a train (that was delayed) and that was the most horrible station. It was so bad I took a photo of it. I'll show it to you some time.