Who's better? Gutbuster or Recess Monkey? There's only one way to decide....FIGHT 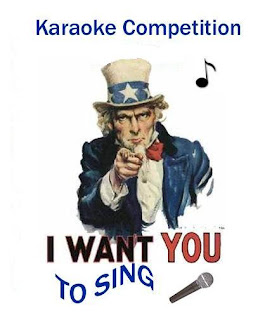 The Lord Lucan is a fine upstanding gent. A little hidden fact of the mysterious aristocrat would be that he is a total lush. A drunk. A sorry shadow of a man. I exagerrate, but you get the point. Giving this unrepenting drunk authority over karaoke is, therefore, a stroke of genius. Without wishing to be too pious (hangovers aplenty to go today) the good Lord was absolutely steaming from the very start.
No sadder sight than a drunk Lord (or more disgustingly perverted in the case of one pin-stripe suited unelected Member of the Other Place) trying to sing. But, alas, fair play; he's a game old boy and can hold his head up high (unless, of course, he chucks up).
Less distinguished would be, in the red corner, Gutbuster (28) vs. the perennial contender, Recess Monkey (30). Indeed the waistline vs. the ego. Now Gutbuster brings a lot to the table including an astounding, insatiable appetite, but the one skill of which he is the proudest is his singing capability. Now I suspect that Gutbuster comes from an illustrious family of Welsh Male Choirs. Indeed with his fiercely held Socialist principles you can almost picture the well-upholstered gent being part of a colliery choir, merrily singing to one and all within earshot. Yet on the three (I think) occassions I have heard Gutbuster sing, I would say underwhelmed would be the most applicable word. This time, I felt for the lad, after a distinctly disappointing effort, his head was actually dropping onto his chest. A broken man. But one thing is for sure, he got up, gave it some and is more deserving than yours truly who recognising the limits to his talents does not do karaoke.
Or should that read, does not do karaoke anymore; for one primate who has seen me displaying my singing prowess would be, ironically, Recess Monkey. This sorry, sorry episode, culminated with a very drunken refrain of "Vote Nikki Gavron for Mayor" during the instrumental part of Tom Jones' "Delilah", is documented on video which is somewhere in my bedroom. Hidden quite intentionally.
As time ticks by it becomes apparent that Recess Monkey is not in the House. Where is the hairy, little fellow? Time continues to fly by when I go to sign a chum in and who should be there as well but Recess Monkey with what he would claim to be his girlfriend and girlfriend's father but anyone else, myself included, would interpret as a Beyonce-esque entourage. For a simian, he is such a diva. Monkey, however, is distraught to discover that he is too late to enter the fray and behind his ever-genial manner, is a deep-seated anger.
It is strange, I admit, to compare karaoke to boxing, but when Audley Harrison 'didn't turn up' for his match with Danny Williams (the first fight) he ended up planted on his derriere. In this case, Recess Monkey ends up arguably better off than the now near-suicidal Gutbuster.