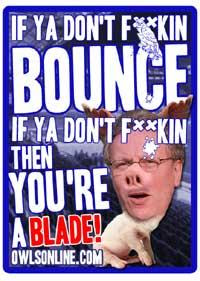 Now I'll admit this freely, I cannot stand Sheffield United. The Pigs are already stinking up the Premiership, but similarly I'll admit my view may well be tainted as I am a Sheffield Wednesday supporter.
I would, therefore, appreciate your comments on this: Is Neil Warnock the biggest twat to ever grace the Premiership? Every Match of the Day, Colin is there protesting his innocence, protesting his team's innocence and generally getting on my tits.
He strikes me as such a smug prick. This weekend's offering was a spat with Reading coach, Wally Downes which could lead to a one-month touchline ban. However, Colin will probably get off because he is viewed as a 'character' with 'passion' instead of the moaning wanker he is. Can't he just been banned for life and then the BBC could follow suit and ban this arsehole from our screens.

Comments:
I like Neil Warnock. Got Argyle our one and only play-off victory at Wembley. Speaking of which, if you fancy seeing the Mighty Greens beating Coventry, I'll be in the Sports tonight for it.

And the fight with Wally Downes was hilarious!

Will be in Sports, although maybe briefly.
You can get me drinks as way of an apology for liking Colin

Neil Warnock is one of the biggest sources of unbridled joy in my life.

As you can see from the laudable list of achievments below he worked untold heroics at the world's oldest football league club.

In late 1988, a new manager arrived, Neil Warnock who had previously taken Scarborough into the Football League as Conference champions. At the end of his first full season, Warnock had led Notts County to promotion back into Division Two. This had come via the club's historic first game at Wembley Stadium in a 2-0 win over Tranmere Rovers. Warnock's magic wasn't done there though, 1990-91 is considered by many County fans to be one of the club's greatest seasons. A famous 1-0 victory over Manchester City in the FA Cup booked them a place in the quarter final where they lost to eventually winners Tottenham Hotspur. Notts also booked their second successive visit to Wembley and their second successive promotion. The Magpies defeated Brighton & Hove Albion 3-1 in front of 60,000 people, 25,000 of them Notts County fans.

The following season was a disappointing one. Notts County were relegated from the top flight at the end of the season. A game against also-doomed Luton Town is still their most recent top division game. Warnock quit in January 1993.

However Warnock's special place in my heart does not restrict itself to success leading the Might Magpies.

He has since as Blades manager twice stopped Nottingham forest from agining promotion. Including masterminding a victory in which the king of own goals Desmond Walker scored his most recent corker.

No wonder the wheel came off your nobbing wheelbarrow. Stick up your ass, Lionboy

I'm with Barry. Warnock whines a lot, and his stamping gesture during the match on Saturday was unnecessary and provocative.

And what a victory for the Mighty Greens last night! I believe that moves us above the Owls Mr Beef!