Today is a good news day! 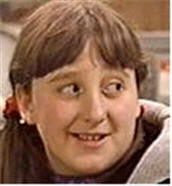 Eyesore blight on the Square, Sonia Jackson is leaving Eastenders. It is a little kept secret that Sonia is my least faovurite character. And with her leaving and Pauline Fowler having respectuflly shuffled off this mortal coil (with a little bit of help from Mr Benn - the guy who did the voice rather than the Deputy Prime Minister aspirant), Eastenders will be a far more pleasant place. Now it is not only Sonia's aesthetics that abhor me, but to be honest, they are a substantial contributing factor. It is also her caring and compassionate side. I hate the way that she is portrayed and think that if characters on Stenders were given the vote Sonia would turn out for Labour. This is a major embarassment. But just to relive her years of glory, Sonia's highlights (the Walford years) include playing the trumpet, being bullied at school, having a baby and giving it away, marrying the man who accidentally run over her then beau, breaking poor Gus' heart, various secretive skullduggery in re-entering her child's life, being too busy to go down the Vic 'cos she had college work, becoming a lesbian, ceasing from lesbianism, kidnapping her daughter and being ugly.
Nah-nah-nah-bye-bye.

Whilst I also find her annoying, just look at that list of exciting storylines. I believe she will be a loss to the show.