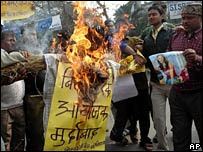 There is nothing, I repeat nothing, that conveys a feeling of total hate and anger as burning an effigy. Burning effigies is, in effect, a convoluted version of a voodoo doll. I have documented this phenomenon before both here and here and it seems that it is not restricted just to Pakistan. Or maybe someone did actually put it on Dragon's Den and it's now spreading westwards, becoming rampant in India. And what has caused this furore? The treatment of Shilpa Shetty in the Celebrity Big Brother house. Jeez, you really got to be careful how you act nowadys, or some twat will get an effigy up and torch it. I mean does anyone really give a flying f*ck about Celebrity Big Brother? I am all up for the punishment fitting the crime, but does this really follow? It's Big Brother for goodness sake. Although, in their defence it seems that the effigy of Jade Goody was fat, had fake tits and was really, really annoying and stupid and apparently had it coming.
But just to avoid having an my own effigy torched (although I doubt this would happen if the bull carries as much gravitas as the cow) I'd like to congratulate Shilpa on winning and I am over the moon it's off our screens now. Now the important question is, that after raising the issue at PMQs, will Keith Vaz table a congratulatory EDM?