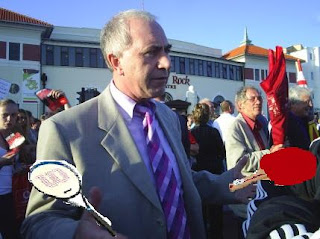 It's Recess baby, and it's time for staffers/bag carriers/MPs to let their hair down. Not literally in the case of one M. Fabricant MP. Anyway to the point: if there's one man who has his finger on the sporting pulse it's Michael Foster MP. That's of the DL ilk, not Pascoe. The Honourable Member for Hastings and Rye has issued a call to arms, or more specifically a call to racquets and bats. Not only the Tennis Club, no, no and thrice no; but also a summons to the British Table Tennis Club. Jolly good, eh?
The letters arrived one day after the other, obviously it is far too important to be contained to one letter. However, not important enough for the letters to deviate too much from a pretty standard format. Perhaps tomorrow an invite to the Parliamentary Badmington Club?
I would advocate great caution, would you want to go up against someone with DL after their name? Ooops my fault, I thought it said DHL - like express delivery. In a self-depreciating manner, Mr Foster says "most of the Members are I suppose 'basic club standard'". Oh I see, they're shit. And there I was picturing Piara Khabra and Kenneth Clarke re-enacting the classic Borg vs. McEnroe Wimbledon final, or Gwyneth Dunwoody and Anne Widdecombe recreating magical Williams sisters' triumphs. Or similarly Viscount Thurso doing a Desmond Douglas - he was a British table tennis player in case you don't know (Douglas not Thurso, who is a Lib Dem MP who has seemingly overnight grown a formidable beard to match his rather dashing moustache).
Pimms-a-cock.

Update: I didn't say when the meets are; (adopting a Socttish accent) around ten-ish, I should think.