I was accosted by a Mr 'Arris, a happy Hammer no less, who asked me whether I was responsible for a poster (sort of) put up in the Norman Shaw South 1st Floor male toilets. I wasn't and hadn't seen the offending piece, or ultimately the offending piece to which it referred. Immediately, I went to the toilets to see what the furore was about and then I saw and then I understood.
A dirty protest and a very impressive put-down to the perpetrator who, in all likelihood, has not revisited the scene of the crime.
I shall let the images speak for themselves. No I won't I'll spell it out; someone, presumably in the grip of dysentery or some such disease, has missed the bowl...(and presumably absent-mindedly shut the lid and re-opened for a smear effect. 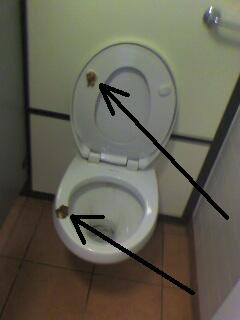 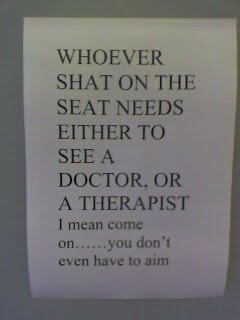 We know who it is as they have been seen exiting said bog AND they leave their post in there.