The Bitterest Pill (I ever had to swallow)

is that the Jam are reforming, but without Paul Weller. The Jam are one of my all-time most faovurite bands and initially I was quite excited to see they were reforming, this excitement has been tempered by the fact that Bruce Foxton (bass and vocals) and Rick Buckler (drums) are going for it without Paul Weller. This isn't the Jam then, is it? More like low-fat marmalade. Still, I imagine it will be better than most of the w*nk currently in the charts. 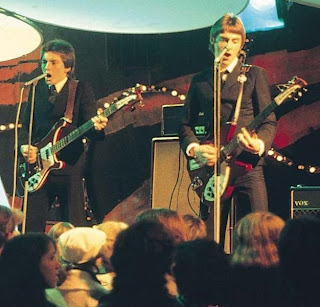 Comments:
Heh! I saw them play in the basement of Tottenham Ct Rd Virgin a couple of years ago when they were promoting their anniversary DVD - but it was only Foxton & Weller that time - apparently Buckler wasn't up for anything with them. Swings & roundabouts...

The Police reformed even though Sting hated the drummer and vice-versa. I don't know if it's urban myth but at the last original Police gig, Stewart Copeland (aforementioned drummer) had a 'fuck off Sting' sign on his drums. Still, it's all dollars under the bridge

Any chance you could give us Aussies some cricketing lessons?