Dave had a sp(l)iffing time at Eton 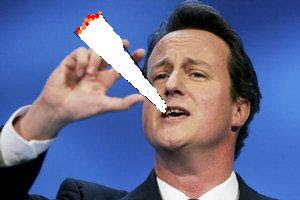 It has come to light that David Dave 'Call me Dave' Cameron, the leader of the Opposition has admitted smoking gear at school. At public school. Mr Spliffy was on it and almost got expelled for getting caught. However, he dodged the bullet. I heard some interview with him saying that journalists and people were welcome to stick cameras up his nose (an unfortunate turn of phrase for someone who has been accused of sticking coke up his hooter more than once) but that politicians were entitled to a private past. Within reason, I guess so. I am not too fussed and can say, categorically, this will have absolutely no effect on which way I'll vote at the next General Election, it still won't be Tory.
I'd have had more respect if Dave had just admitted to it and given it a 'no regrets' stance, but no; we get the 'well we've all make mistakes' spiel. Instead, you get the feeling that Dave is a liar, certainly not a 'pretty straight-forward kind of a guy'. Stll it's nice to see that the Tories do have some green credentials.