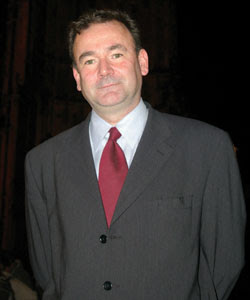 I can't say I am too fussed as to who the next Deputy Leader or the Labour Party will be. I am sure who I do not want (take a bow Ms Harman, Mr Johnson, Ms Blears, Mr Straw) but am quite ambivalent about the rest. Sure, Jon Cruddas is not mired in the stink of New Labour too much and, at least, he has some definite ideas on what the role should encapsulate. Yet this idea is, well to quote my colleague Morag, a 'stupid arse idea.' According to Cruddas cabinet ministers who intend to challenge for the deputy leadership should resign. Easy for you to say as the only candidate not to currently be in the cab....oh I get it. Sly.

Comments:
Every office should have a voice of reason (preferably belonging to a beautiful Scottish woman). :-)

It's not exactly unreasonable to point out that certain Cabinet ministers are now leaking letters or planting stories to the effect that they are secretly phenomenally left wing and totally opposed to entire swathes of government policy on a near-daily basis, all while continuing to sit in Cabinet agreeing to whatever Blair says.

I don't think Jon actually meant they should literally all resign, but he's right to point out there are double standards at work here in some cases...

oh mr parrot - i just knew this would get a response of u. i am waiting for the rest of the team to follow suit.
it did say cabinet ministers should resign

I'm not sure that's Nick Parrott. over on Cruddas' site another Cruddas supporter also called "Nick" is posting similarly supportive statements for Jon. Am glad they are. Jon Cruddas is doing brilliantly and I hope he wins.

well thanks for correcting me in the nick of time. chortle, chortle.

Too many Nicks, it all gets very confusing.

Cabinet Ministers should resign if they want to openly oppose government policy. Jon wasn't saying they should all just resign right now, apropos of nothing. Entertaining though such a situation might be, it would obviously be a bit a silly.

I think the BBC rather oversold their story on this one - it was looking like a slow news day until Yates of the Yard intervened, which neatly brings us back to the nick...