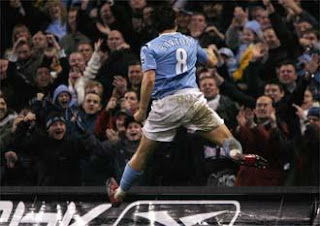 Ok so he has had what some would call a chequered past (he's only 24), but Joey Barton sure can play. Yes he's stubbed a cigar out in the face of a youth team player, beaten up some kid in Thailand and bared his arse against Everton back in September but Barton's high point must surely be his response to England players releasing their autobiographies after the World Cup. His exact quote is as accurate as it is blunt: "Why were they bringing books out? It’s like 'we got beat in the quarter-finals, I played like s***, Here’s my book.' Who wants to read that?" I don't think you can argue with that.
So what if this has put the noses of such literary luminaries as Gerrard and Lampard out of joint, frankly their performances during the World Cup did the same to a large portion of the country's football fans. Barton is set to remain unrepentant and fair play to him.
Also included are Kieron Dyer and Jonathan Woodgate after their injury woes and recalled after 4 years is Gareth Barry. These are all plusses, so I'll put my hand up and say 'Well done Steve McLaren'. The squad doesn't quite score an A* though. I would have had Matt Taylor in as left-back cover and wouldn't have included either John Terry or Andrew Johnson. It's only a friendly and as neither of these players are fit yet, wouldn't it make more sense to brave it with kids? Any one of Agbonlahor, Young, Lita, Nugent, Walcott or Derbyshire (all in the U-21 squad) may have been worth a go. And at the back you got to think Sol Campbell's renaissance at Portsmouth has been mighty impressive.
Out goes Kieran Richardson (back to the U-21 squad) but sadly there is no call-up for Scott Carson and Jenas is still in the squad. I would have liked to see Kevin Nolan or, as an outside shout, Tom Huddlestone.
All in all though, it's the most encouraged I have been during the McLaren era. Now we got to see who he actually plays. As ever, come on England.