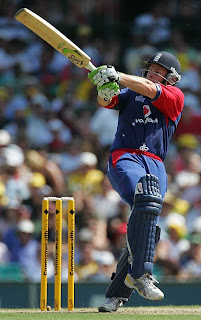 You read it rght. England absolutely clobber the Aussies with a 92 run victory. Oh happy days, or perhaps oh happy day. Ed Joyce making a maiden One Day International century, a half centruy from Ian Bell and important contribtions from Loye, Strauss and Dalrymple took England to an impressive 292. For an out of form team reported to be struggling for morale it is a phenomenal performance.
Personally, I was overjoyed to see Ravi Bopara makes his debut. Ok so I am an Essex fan, but Essex players in the team just makes sense. Like the England selectors I really am not sure who to play as the first XI in ODIs (unlike the selectors, however, I am not paid for the honour) so instead I'll plump for some security and go for the squad of 15:

I know there's no Collingwood and no Nixon, but them be my choices. However, rumours have emerged today in no less an authoirty than the Daily Mail that the selectors are going to make a panic call for Darren Gough (other names netioned in the mix have been James Kirtley and Ryan Sidebottom).. I don't think this would be a progressive move at all and would give Plunkett, Broad, Chris Tremlett or Saj Mahmood a prolonged run in the team.
And just in case anybody has forgotten: we rammed it up 'em today!

Comments:
Wahey! Highlights (and we can call them that now we've won) on Sky Sports at the moment! Who needs to work on a Friday?!