A few months ago, a Comrade chum, well more of a Stakeholder if truth be told, named Wes mentioned that he had started a blog and would I link to it. I happily obliged and he happily reciprocated.* The blog I don't like Cricket started 99 days before the Ashes and covered that debacle. However, it then stalled and appeared to have gone the way of some many others and just died. But today, I see it is about and the Collective have recharged their batteries and are even on the look out for new contributers.
May I take this opportunity to do my own bit to gee the boyz and girlz up. I hereby declare Why I Do Like Cricket - click to enlarge: 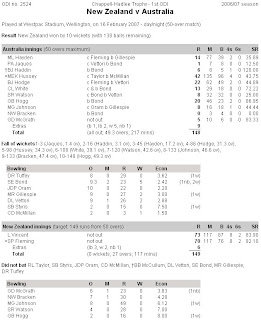 Comments:
Man, I missed that. Beautiful!

This comment has been removed by a blog administrator.

Are you not already dreaming of victory in the West Indies?

Everything is ok again! Seeing as we can't play NZ in the super 8s and it doesn't matter where we finish in the groups, hopefully any spearing Bond gives us will be irrelavant: and then his back will screw up again.

Pakistan don't have a functioning pace attack; South Africa will be scared of their ex-compatriot KP (and Gibbs will go into racist overdrive at three British Asians playing for us, with three different relgions); Monty can outdance Sreesanth; we've got the momentum on Aus; we only just lost to the Windies in the last ICC in England (and they'll be too embarrassed at the competiton's shoddy infrastructure and incomplete stadiums); the Sri Lankans' coach secretly wants to coach us -it's in the bag.