I got your back! 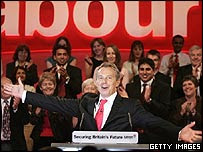 Whiter than white took another turn for the grey with the news that Lord Goldsmith, the Attorney General, has been having it away. Now I do agree that an affair does not effect the person's ability to do a job, but it would kind of be...novel, if Tony Blair didn't back all of his colleagues who've been having affairs:

Blair backs Prescott (the BBC) - actually it's only the 'PM's Spokesperson', but when it comes to backers you take what you can get

That's a lot of backing. I suppose that's why it's all Current Affairs.