I'll have the Full English please...tattooed on my head 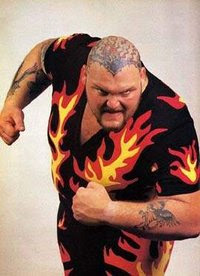 When I was young I remember a wrestler called Bam Bam Bigelow. He was massive, used to be a Bounty Hunter and had a tattooed head. A tattooed head! Sadly, Bam Bam recently passed away, but he has now been suceeded by this chap, Dayne Gilbey. Dayne? Interesting name. This man answered the call from tattooist Blane Dickinson to have a full English tattooed on his head. Dayne and Blane, thinking bout it maybe they were meant for each other. 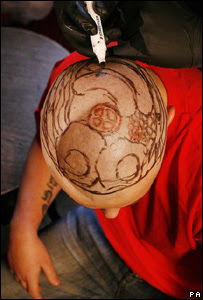 Initially, there were reports that Gilbey was going to raise money for the Birmingham Children's Hospital, but in reports of the actual tattoo there was no mention of the hospital.
Friends have asked him why he had it done and he had a ready prepared answer: "For me it's just something different which has never been done before. My mum is really unhappy about it and threatened to throw me out but I don't think she'll go through with it."
This really is unfeasibly stupid, I mean what was he thinking...no hash browns???? But the creator of this idiocy, Blane Dickinson, is not done with hare-brained ideas next up he wants to tattoo an image of someone's face on the back of their head. Jesus wept.