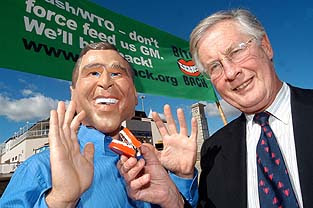 Many thanks to Gutbuster for emailing me so that the first thing I saw when I logged on this morning was that Michael Meacher will be announcing his candidature for the Labour Party leadership. I have mixed feelings shared, I'm sure, by many on the Left of the Party. Apart from Harry Perkins, of course, whose feelings are conveyed here. Yes, Meacher has not been a picture of consistency, but at least he has voted against some of the Blairite policy which, clearly, puts him higher than Gordon in my estimations. The bigger problem is that it will, or at the very least has the potential to, split the Left vote ensuring that neither McDonnell or Meacher get the required 44 nominations and Gordon coasts in without a vote.
Personally, what I would ideally hope for is that Labour MPs who have their suspicions of the Brownite agenda but cannot bring themselves to vote for John McDonnell will instead plump for Meacher, i.e. Meacher nicking off Brown and not McDonnell which, in turn, would leave a fatal 3 way between Brown, Meacher and McDonnell - now that would be quite good.

But Labour MP Stephen Pound said Mr Meacher was a "faintly ridiculous" figure, adding he would be surprised if the veteran left-winger managed to get the required support.

"It's a pity because, frankly, he's going to get humiliated," said the Ealing North MP.

"I suspect he knows that, if he put his ego to one side a bit he would realise that.

"Michael Meacher is a major figure on the British political scene, yet the majority of people I have spoken to, who came into Parliament in the last six or seven years, just said: 'Who?' They didn't know who he was."