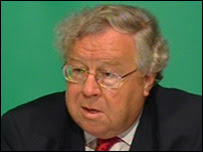 The Tories of South Staffordshire have deselected Sir Patrick Cormack in a truly et tu bruté moment. He has served them for 37 years. Although, I am not a Tory or a fan of them for that matter, this has surely got to be wrong. Sir Patrick has always seemed like a decent cove to me with firm-held principles, and in his dealings with my boss has been nothing less than a gentleman. Others with greater minds than me (and Iain Dale too) have blogged this matter and the majority seem to be in favour of Sir Patrick, none more so than arch anti-abortionist in-chief, Nadine Dorries. Ms Dorries, voted #9 (she should be loads higher. Ok only 8 places higher) in Adam Boulton's Valentines 'I would' list, has leaped to Sir Patrick's defence saying that she would defy Whips and support Sir Patrick as an Independent should it come down to it. More power to you. And you're fit too.
However you can expect the majority of Tories, who were incidentally cock-a-hoop about Peter Law winning the previously Labour held seat of Blaenau Gwent as an Independent, to no doubt have the greatest of sympathies with Sir Patrick...Blaenau Gwent...blah blah blah...and really bloody disapprove of the process, but then miraculously managed to salve their collective consciences (when someone with high-precision guidance weapons can locate it) by concluding that to stand as an Independent would really damage the new Tory party. This new Tory party will not only be, as Alex Hilton notes here "dedicated to lining up the entire British working class and buggering them one by one" but also stabbing each other in the back. You think they would have got this out of their system after the unfortunate knifing of the unfortunate George Iain and Duncan Smith.
Good luck Sir Patrick, whether by reversing the deselection or standing as an Independent

Comments:
Isn't he the Tory who single handedly took on Otis Ferry and the Eton Hooray Rampagers when they stormed the chamber?

Agreed. He'll go for a vote of the constituency membership, which he'll win.