My joy at the passing of two of my least favourite Eastenders characters ever: Pauline (to death) and Sonia (to Manchester), has been somewhat tempered by the introduction of Shirley Carter. Now Shirley's been around the block a few times, and she isn't scared to remind anyone who crosses her, or even talks to her actually, by drawing reference to her years on the clock whilst exuding a heavily perfumed (Eau de Marlboro Light) sexual aura. Truly she is horrific. So I thought I'd find a picture of her so that I could convey my feelings on this subject. I duly entered "Shirley Eastenders" into Google and was directed to the Eastenders character site (almost every character past and present has their own page), but strangely not to the page of Shirley Carter, for that is the surname of this tough-as-nails Shirley; but rather to the page of Shirley Benson. You remember her don't you? 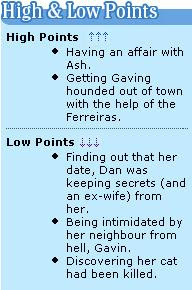 Shirley lived downstairs from Gavin, the neighbour from hell. She also had storylines, and romantic tristes, with the Ferreira family. Sadly the Ferreira family never quite clicked, I mean an Asian family in the East End? That's unbelievable. Or was it perhaps that the father of the household, Dan, kept on dressing up as Elvis or that his offspiring were crap: there was Adi: the boring one, Ash: the boring one, Kareena: the boring one and Ronnie and Tariq - THE BAD BOYS ONES (two), but boring. Anyway, the biogs of the characters have their links to other characters, love interests and their individual 'ups and downs' and Shirley's down brings a tear to my eye. Not only did she have her rows with Gavin, her neighbour from hell (mentioned above) and her love interests with the Ferriera family (mentioned above) but, worst of all, her cat was killed. Not by the curiosity of her owner's stories, one would speculate.

I find this difficult as, as I have told you via email, I have a great deal of respect for Yvonne from Bad Girls, who was a marvellous character and nearly caused the downfall of The Evil Jim Fenner.

However, I agree that in the Eastenders context she is much less good. And has caused Kevin to vanish, and I quite liked him.

Also, the valentines day cocktails she was responsible for looked minging. What is a loving cup?

a loving cup is part of the female body. downstairs.

why would one name a cocktail after this?
and what are the ingredients of the aforementioned cocktail? does it really exist or was it just made up for eastenders?