Would Sir and Madam be caring for full pension? 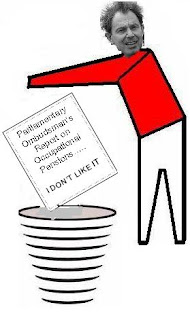 Not if you're staying in the Guesthouse Occupationalo. A High Court ruling has judged that the Government must reconsider its decision to not enact the findings of the Parliamentary Ombudsman. The spoilsports. Obviously, Conservatives and critics will be licking their chops. No doubt it'll be rah-rah time in the House for a bit. They will impartially point out that the Government are scumbags, stealing off Pensioners hand-over-fist. They will, sadly quite correctly, point out that the Government is setting a most unfortunate precedent in ignoring an Ombudsman Report. The braver amongst them may even comment on how the Tory Government helped out those who lost money through Maxwell being more bent than the Charlton front-line of Marcus and Darren. Fewer on the Opposition benches, I imagine, will care to recall that they share a political heritage with Edwina Currie who, lest we forget, suggested, in her glorious tenure in the Department of Health, that freezing pensioners threatened by hypothermia because they could not afford heating should "wrap up warm" in woolly hats and long johns.
The High Court ruling has, however, found that the Government is culpable of inaccuracies and potential misleadings regarding the minimum funding requirement. The Court also ruled that the Department of Work and Pensions should reconsider making arrangements to restore fully the pension losses of the people concerned when their employers became insolvent.
However, the Government has been cleared of being in breach of the European Convention on Human Rights and has also been absolved of being responsible, through maladministration, for the financial losses of every indiviudal who suffered the winding up of their pension scheme.
The Government was also cleared of the murder of the first born and the snow a couple of weeks ago.
What would be helpful was if the Government put politics out of this and realised that there is a massive issue to be solved and their truculence in recent times has not helped at all. The Treasury should dip their hand in their pockets (not for that!) and cough up more money for the Financial Assistance Scheme and, basically, just get a move-on.
There could, of course, be some way of getting BIG BUSINESS to contribute to compensation packages if they actually gave a fuck about people as opposed to cosy little Corporate Social Responsiblity ideas and Community Projects. Or they could just pay more. Sorry I've turned into a Commie. Next up I'd probably suggest something heretical like if we didn't renew Trident for billions and billions of pounds we could cover all of this, raise the state pension and still have enough left for a rainy day.