Barry's homage to Vodafone, his very own 121 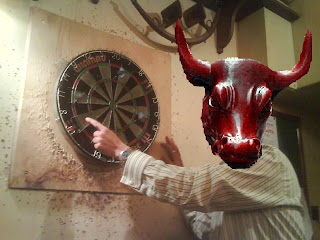 You know things are getting back on track when you start hitting the big darts, the big finishes and the crowd starts to dig it. To set the scene it was a winner stays on between myself, the Lord Lucan and Deep V. Things started to hot up when Deep V, out of nowhere, banged in a 138. Up to the oche stepped 'the Hotstepper', my Ini Kamoze inspired darts nickname, and replied with a 121 outshot. Nice little treble 20, treble 15, double 8 (see pic). Thanks and goodnight. Up stepped the Lord Lucan who spanked a 140, 'the Hotstepper' responded with a 123 (narrowly, very narrowly missing out on a first ever maximum). Left on 115 and buoyed by my earlier outshot, my hopes were dashed by Lucan taking out 74. This is unheard of darts. Deep V then vanquished the Lord Lucan with a double 17 out. Deep V then fell victim to a double 16, first dart out and point combo.
Then off to the Rugby Tavern, Holborn for top of the table Wednesday's game against Leicester City. I think I have some previous with Leicester. I think I have previous with most of the teams due to my habit of losing my cool at times. Believe, I'm always cool though. Well, I contributed to Wednesday quickly finding themselves 3-0 down (my part of our doubles leg will go down in the books as a really, really bad leg of darts), 3-0 rapidly became 5-1 and the Owls were staring down the barrel of an old-fashioned kicking. I then found something approaching form and won my singles after my opponent had, what must have been, over 30 darts at the double. Single 10 and double ten pulled it back to 5-2 and then two more legs reduced the deficit to one. Sadly, it was a bridge too far and the next leg went to Leicester and the victory was theirs. Wily Foxes. Beer leg went to Wednesday though, so the night ended on a high. Literally.

Comments:
Without wanting to be picky but...It wasn't Vodafone who asked who you'd have a 121 with. It was actually the cunningly named 1-2-1 who were later taken over by T-Mobile and changed their name. FACT.

It was great darts though.

Wish I would have been there. The outcome may have been somewhat different...