Bored of the Premiership? 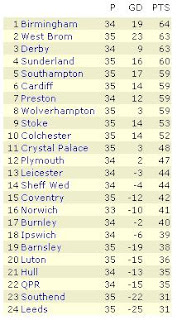 Heaven forbid that anyone might be tiring of the Premiership this season. At least Chelsea haven't run away with the league for the third season on the trot, but to what degree does it actually spice things up that the contenders to the throne are Manchester United, whose hegemony over the British game in the last decade means that there resurgence cannot be seen as a breath of fresh air. Arsenal appear to be in one of their troughs (despite having an untold parade of fantastically talented youth players) and Liverpool, whilst arguably being the best of the rest, lag some way behind the big two - although if they were to do the improbable and win the Champions League for the second time in three seasons the balance may start to shift.
So if you are becoming blase with the continuing flattering to deceive of your Pompeys, Villas and Evertons and are accustomed to West Ham and Watford losing more often than not with teams such as Wigan, the Pigs, Man City and Charlton doing little better, I would urge you to follow the Championship for hte rest of the season.
This league is tight and currently the eight teams at the top of the league are seperated by a meagre five points. Rarely for the Championship, the three teams who suffered relegation from the Premiership: Sunderland, W.B.A and Birmingham all find themselves in the mix alongside the former fixture of the top flight, Southampton. Added to the mix are play-off or thereabouts regulars, Preston and Wolves with the two surprises packets of the season Derby County and Cardiff. I believe five of these teams have already topped hte league with three of them (Derby, W.B.A and Birmingham) having shared the honour in the week just gone.
All through the season I thought the Baggies would prevail and I won't change my mind just yet and together with them I would favour Sunderland for the other automatic place. Sunderland are yet to lose in 2007 and have been flying up the league; a last minute Liam Miller goal gave them a 2-1 victory over Derby which summed it up for the Mackems: when you're hot, you're hot.
For the play-offs, I'd reckon Wolves and Cardiff will miss out. Obviously, given my wayward form on the predictions you might as well get down the bookies and bet against Sunderand and W.B.A getting promoted automatically.
Look at the squads of these top teams, there really are some excellent players around and a lot of players capable of scoring a lot of goals. Derby can boast Steve Howard and Cardiff have the league's top-scorer in Michael Chopra. Birmingham have in Gary McSheffrey perhaps the best player in the league and Bendtner, Larsson and Muamba have all fitted the bill since arriving from Arsenal. In Kamara and Phillips, West Brom have a strike force second to none, although the Southampton pairing of Rasiak (fresh from treading water at Spurs) and Kenwyne Jones have been banging them in recently. Wolves' form has picked up with Andy Keogh, Olofinjana, McIndoe, Kightly and Ward all playing to the top of their game. Without wishing to belittle Preston, David Nugent is their stand out player and he just seems to get better and better.
But one thing is for sure, the Championship is where it's at and is Britain's most exciting professional league (I even include Scotland where I think Celtic mathematically clinched the league in September)

Comments:
Can't believe you didn't mention Leeds. We really shouldn't miss this opportunity to have a good laugh at Dennis Wise's expense. ;-)

There's only one way the premier league will become interesting, and that's for Sheffield Wednesday to get back into it!

Mind you, the thought of Col U entertaining the likes of Arsenal & Manchester United does amuse me!

I wonder if we'll see more people going to local football, there is a lot of quality football going on in the Ryman leagues, just around the corner for most of us for £6 instead of £50 for the top premiership sides. There's no way you get ten times the football.

didn't want to mention L**ds, in case it put the mockers on the Wednesday. But alas we won, so it's bye bye L**ds scum.