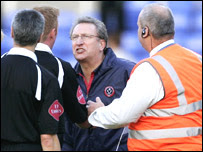 Just win your games and shut your gob, Colin. Colin, the Pig manager has been as ungracious as ever by panning Middlesbrough for not playing their strongest team against Manchester City. Manchester City were flirting dangerously close to the relegation zone and their 2-0 win over Boro eased their own worries, actually taking them above...guess who?...Sheffield United.
So what does Colin do? Well here's the rant in all its glory:

"I know Stuart is a friend of Gareth Southgate and I know [Middlesbrough] have got Manchester United but I'd love them to lose the next six games and see how they react under that kind of pressure," said Warnock.
If I could pick three players not to play against me it would be Woodgate, Viduka and Arca. He must know that without them three they've got very little chance of winning.
I know Gareth is a new manager, I just hope it happens to him one day. I guess Alan Pardew feels the same way.
I just think it's scandalous and I don't think Middlesbrough should disrespect Sheffield United, West Ham and all the others at the bottom of the table."

So where do you begin? Well for starters Colin is well and truly living up to his name. Would you back Woodgate to get through two matches in three days? No. Would you back Viduka to do the same? Nope. I think Arca has also had injuries. Southgate played Yakubu, their number 1 player. They played Mark Schwarzer, their first choice keeper.
What would be more important for Boro? To win the F.A Cup or 3 points against Manchester City? It's a no-brainer. And then Colin goes on to wish Boro to lose loads. Hey Colin everything would be alright if your Pigs started, you know, winning. What is scandalous is you ranting like a spoilt kid. All this disrespecting stuff is trying to deflect attention from YOUR team going backwards. It is YOU Colin who shows a total lack of respect.

Comments:
I'm just chuffed that we beat Col U as it means that I've been having a good gloat round Colchester in the past week! :-)

better than when we got trolleyed 4-0, i bet. god that was a bad night.

You bet it was a bad night! I'm currently trying to get tickets for the Col U v Norwich game at World of Sheds (sorry I mean Layer Road!) and I reckon my chances of getting one of the 5000 home tickets for that match are somewhere between Bob Hope and no hope!

Well said my bovine friend. Two matches in three days for Mr Injury and Mr Pie Eater is unrealistic and Arca had a groin strain. Let's face it, if the Boro had won, it wouldn't be an issue. How is Southgate supposed to know Manchester "couldn't score in a brothel" City would find their striking feet at last.

Anyway, can't find anything wrong with what you've said. I, as well as many other blades feel old colin is a liability and we should have got rid a long time ago.


It's our job to wim matches, no one elses and its our results by which we stand or fall. Problem, is, Colin is getting his excuses in early, as normel.

yodel, a pissed off blade.