Not long to go now. The Cricket World Cup is a just around the corner. It's so exciting that even England losing 3 quick wickets and Paul Allott doing commentary can't get me down. As someone who is notoriously rubbish at predictions, I thought I'd pick out the players to watch. This should serve as the proverbial kiss of death. 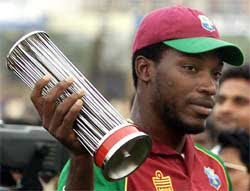 Bermuda - Well there can only be one man to watch. Probably because you can't miss him, it's the Big Guy: Dwayne Leverock. When not spinning out England's best, he eats.

Canada - John Davison's century against the Windies in the '03 World Cup was sensational (as was the catch to dismiss him). Also the only Candian player I have heard of.

Scotland - It's all about Gavin Hamilton. A former England international with the kind of test match figures that make Raul Lewis look like Murali - in his only test match Hamilton bagged a pair and didn't take a wicket. Now he doesn't bowl much after a debilitating bout of the yips. Bats well for Scotland though.

Ireland - Opening bat, William Porterfield has had a Hussey-esque start to his career, averaging something daft like 75. No more Ed Joyce for the Irish, so Porterfield looks the most capable of filling the void. 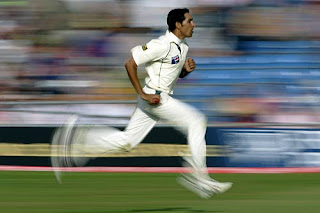 Australia - Hard to pick just one, but it must be Ricky Ponting. Words fail me, this guy is just plain brilliant.

South Africa - Speaking of brilliant, how about Shaun Pollock? Economical, takes wickets and scores runs too, normally quickly with plenty of boundaries.

West Indies - Is there a cool man in the building? Enter Chris Gayle, a man so cool it's unreal. Also my favourite contemporary cricketer, expect Gayle to give some poor bastards a real battering 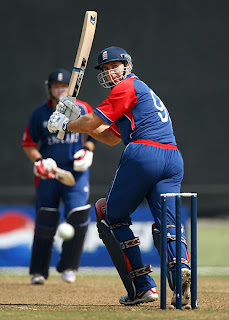 India - Yuvraj Singh is that most valued of one-day commodities - a finisher, and like Ronsil he does exactly what it says on the tin. Now recovered from injuries and chuck in his handy left-arm spin and he's a good bet.

Pakistan - With Mohammed Asif and Shoaib Akhtar injured and/or high (allegedly) the Pakistani attack will need Umar Gul to be at his best. His best is very, very good.

New Zealand - Having injured his finger, Jacob Oram considered having it amputated so as not to miss the World Cup - that kind of dedication combined with hitting the balls miles and being a top notch first change bowler makes Jacob Oram my Kiwi to watch.

Sri Lanka - I remember Jayasuriya and Kaluwitharana battering everyone in the 1996 World Cup. 11 years on and Jayasuriya is still doing it and taking quite a few wickets with his innocuous looking spin.

Bangladesh - Aftab Ahmed. Can't get too excited about Bangladeshi cricket. 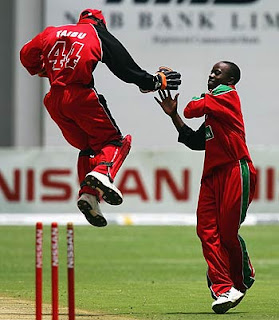 Zimbabwe - Prosper Utseya stands out as having a quite remarkable economy rate in ODIs, especially considering that the team he plays for are little better than hopeless. He's about 21, captain and has a good name. I do miss the Zimbabwe team of the late 90s: Murray Goodwin, Neil Johnson, Andy and Grant Flower, Heath Streak...now look at them. So bad, I think Mugabe's in the squad.

Kenya - Christ on a bike, how many team are in this competition? At least Kenya are good value to watch and always likely to surprise - remember Cameron Cuffy being clean bowled to give Kenya a famous win over the Windies in WC 96? Anyway, Steve Tikolo has been playing for decades, so he must be doing something right.

Holland - They're not going to do much, I fear but at least among their ranks the Dutch have Ryan ten Doeschete: a good all-rounder and particularly explosive bat. He also play County Cricket for Essex. What a man.

Comments:
Shaun Bond will make a splash. Take away the bowlers ready for retirement, and Bond is right up there with Asif.