I think I have probably said so before but West Ham are my second team, so I haven't particularly enjoyed seeing them lurch from disaster to disaster. Yet Sunday's cataclysmic balls-up against Tottenham was truly a sight to behold. It was pretty funny. I joined at half-time with West Ham 2-0 on Spurs. Two excellent goals toom the second of which was Carlos Tevez's first in the Premiership. And just when things were going great, they hit the self-destruct button. Firs up Lee Bowyer hacks down Aaaron Lennon and Jermaine Defoe slots the resultant penalty away. Then Teemu Tainio volleys in from the edge of the area 2-2 and it's going Pete Tong. Enter stage left Bobby Zamora, the former Spurs player. He comes on as a sub and, with his first touch, heads West Ham back into the lead. 85 minutes gone. 3-2 West Ham. Game over and three much needed points. Then Dimitar Berbatov knocks in a free kick to level it up at 3-3 and with West Ham going hell for leather for a winner, they get the sucker punch. Of all the players, Paul Stalteri grabs the winner for Spurs. That was the most exciting half of football I can remember.

But back to my favourite topic, the Championship, and Sunderland win again. They are flying up the league. Birmingham win, Derby thump Colchester and Wolves resurgence continues. It really is an excellent league. Sheffield Wednesday build on their win over Southend by dispatching lowly L**ds 3-2. Lowly L**ds, it's a nice turn of phrase to type. And many thanks to Goodstuff for sending me this rather amusing pic. 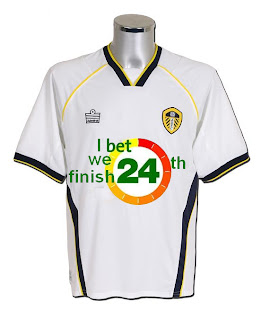 Comments:
A very honourable mention should also go to League 2 and Stockport County. The team has just broken a League record of nine consecutive clean sheets, dating back to 1888. And that's for a team currently in only 6th place!

Unbelieveable. Top marks to manager Jim Gannon (Barry, reserve your bile, he is an ex-pig) and keeper Wayne Hennessey (and the rest of the lads)

Fantastic game. I hope the next game, in Braga, will be so spectacular as this one. You're welcome in Braga in this fantastic stadium!

thanks for that pedro