It's official the House of Lords will be 100% elected. Maybe. 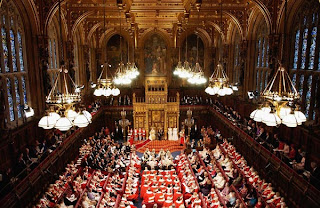 Much furore over the House of Lords. Yeh they're going to be 100% voted. Or are they? The vote is 'indicative' - talk about procrastination being the thief of all time. The modernisation of the House - honestly, sooner or later they'll have a non-uniform day. You can almost imagine MPs wearing hoodies. Of course, the term 'turkey's don't vote for Christmas' was created for a case like this. However, if we do get an elected Second Chamber there is still the horrible prospect of another bloody vote.
Yet I cannot share the jubilation of some people. Sadly, I am not of the opinion that the moment we get a 100% elected Second Chamber will herald a New Jerusalem. Similarly, I am not a Republican. The thought that Britain would transform into a latter-day Land of Milk and Honey if we didn't have a monarchy is pie-in-the-sky wet idealism. These concepts do not even scratch the veneer of the issue. We need progressive policy and, as nice and cosy as an elected Second Chamber would be, that requires a progressive Government. Whether we have this progressive Government currently is open to conjecture.