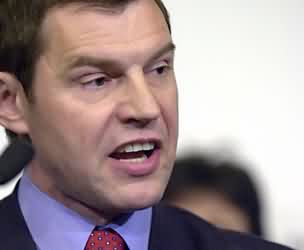 The first member of the Labour Government resigns over Trident. Bye, bye Nigel Griffiths MP, hitherto the Deputy Leader of the House. Note to Government: Trident may well turn round and bite you on the ass. There are Labour Party members, and significantly voters, who are thoroughly pissed off at the prospect of splurging billions of pounds sterling up the wall. I know the reasons for having Trident, maybe just explain them fully to the Government now.

Fuck me, that's going to rock the firmament.

And delbert, it may not move the earth, but a butterfly flaps it's wings...

and no-one hears it fall

Fancy laying out your opposition to Trident in terms more convincing to those of us with a less optimistic view of national security in the 21st century than 'the money could be better spent elsewhere'?

I have no doubt myself that some of the money could be better spent elsewhere. I also don't doubt that we could ahd should cut more of our arsenal but getting rid completely would leave us either overly reliant on the USofA or bound to a hitherto less than productive path of seeking a common European defensive stance?

apologies for the speaker/leader mistake. my bad, mind was slightly elsewhere yesterday.
butterflies wings, firmaments whatever. a member of the government has resigned and that don't happen every day.
i'll lay my opposition out when i got more time.