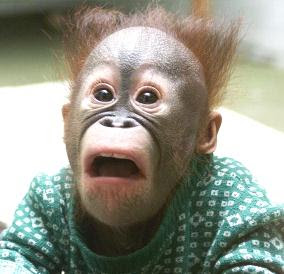 I feared that today would be a bad day. I was all set to fly in from Italy, where I had enjoyed a most magnificent weekend with the quite magnificent Red Fox. I assumed, correctly as it turned out, that I would be swamped at work and that it would be all hands to the pump. Yet with joyous thoughts in my heart and armed with only a copy of Sharpe's Fury as hand luggage I persevered. So I got into work and the office is empty and a cursory check of my emails showed one from my good friend, Recess Monkey drawing my attention to his blunderings here and here. Now I have enjoyed the privilege of the esteeemd Simian's friendship for many a moon and the fact that he has falsely blogged someone's death is really of little relevance, but I love the comments left. Honestly, being brandished "a c*nt" so many times must bring back harrowing memories from his time at Ilford County High School. So permit me to re-produce some of my favourites:

Alex, this is serious, you’re scaring people. Either substantiate your story or take the post down. I realise that, like most people on the left you nurture an infantile hatred for Thatcher, but that is still no exuse for running a story like this without any proof.

One can only assume that Henry scares easily. Or perhaps when she dies, admirers up and down the country will suffer palpatations and, to quote Monsieur Alfonse, the "dicky ticker"

I don’t believe you, you are a liar

IS THIS TRUE? If this is some sick prank, I am not amused.

Jon, much like Queen Victoria (who I can reliably say is dead), is not amused.

wishing somebody’s death is rather disgusting to be honest. i despise paris hilton yet i don’t want her to die. i hate a lot of people but don’t want them to die.

For the love of God! It is not wishing someone dead. He thought she was. He was misinformed and didn't check it out first. Paris Hilton and Lady Thatcher? Yes, I do see how these two could inflame similar incendiary emotions.

True or not, this blog really sums up why Labour is now so crap at news management.

Hmmm??? "True or not" muses Chatterbox. Allow me to intercede; if it is true it is exemplary journalism, as it wasn't it's shit. How does one blogger's actions reflect on a national Government? Nope, no idea either.

And saving the best til last:

Fuck off back to bed you chimp. I’ve written up your obituary you disgusting creature - and yes you have edited the previous post.

Mr Prague Tory, a sort of diet-Iain Dale without the research and reputation (making him a kind of voicebox, I guess) has written up an obituary for Mr Monkey. Slow news day methinks. I'll probably get round to it later, but Prague Tory also posts inaccurately without research and deletes comments that point this out.

Comments:
How's things in the bunker?

not too bad thanks. how's things up Iain's ass?
just to remind you, Mark Hunter is MP for Cheadle.

Haven't got time to read all of the comments but i loved the following, which was very well thought out:

"The best Prime Minister of the century, almost surpassing even Churchill."