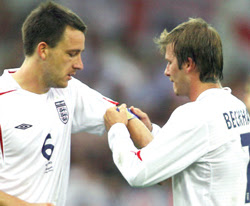 John Terry, the England captain is a very good player and no doubt about that. And despite England's to-date pretty dismal run in the Euro qualifiers making tomorrow's match in Tel Aviv a must-win, I think John Terry may just be marginally over-egging the Israeli pudding. As quoted in the Sun: "We need to look to this game as a positive thing, where we can go out and perform against one of the best sides in the world."
One of the best teams in the world? Huh? Go figure. For those of you not in the know, Israel last qualified for a major international championship in 1970* and this is their solitary World Cup performance. They have never qualified for hte Ruo Championships. Now there's top teams, there's top teams and there's Israel. Sure they're pretty decent and have a few decent players but I'd stop some way of saying they're one of the best in the world, mainly because it is wildly inaccurate.
He also misinterprets the term 'great manager' as this quote from a recent interview proves: "If you look at the great managers, like Mourinho and McClaren, they all want to know what the players are feeling and what they are thnking." Let me just get this straight, Israel are a top world team and Steve McClaren is a great manager? Blimey, I must be behind the times.

* Didn't know that until I t'internetted it. Not a great success mind. Out first round.